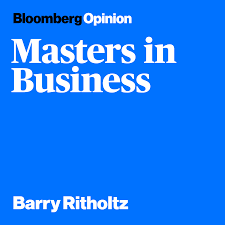 I am a regular connoisseur of Barry Ritholtz’s work both in print and digital.  Barry writes for his own site The Big Picture in addition to columns at Bloomberg and The Washington Post.  A few years ago Barry began work at Bloomberg on a podcast series called Master in Business (MIB).  The premise behind the show is centered on having conversations with some of the brightest and most talented people both inside and outside of the realm of finance and business.

This past week Barry reached a milestone, his 100th podcast, and fittingly it featured Jack Schwager.  Jack is the author of the Market Wizards series of books that are a must read for people within the investment industry.  Barry credits Jack as being part of the inspiration behind Master in Business which follows a similar format to how Jack wrote the Market Wizards books.

Below is a curated edition of my favorite MIB podcasts.  If I could only listen to a few, it would be conversations with Scott Galloway, Ken Feinberg, Michael Mauboussin, and Howard Marks.  They are in order by date and I have underlined the guest.  The conversation topic is in bold.  The best way to access the podcasts are through iTunes but they can also be reached here at Blomberg.

Congrats Barry and thanks for the continued sharing of knowledge.