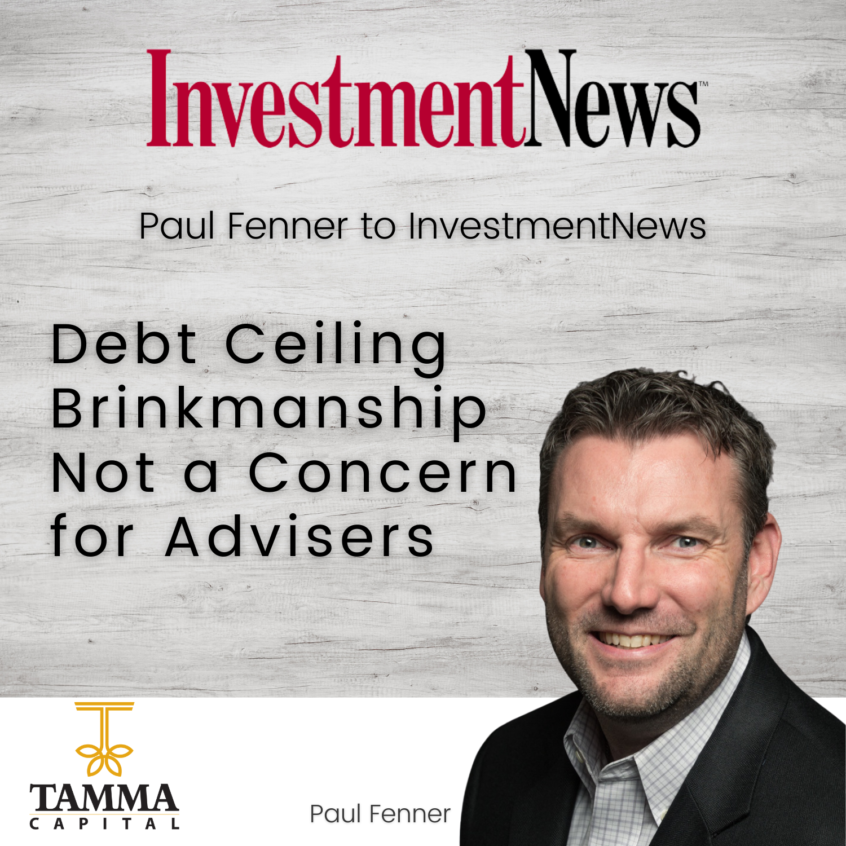 The debt ceiling debacle has been kicked down the road, at least for another few months. Mark Schoeff Jr.​ at InvestmentNews​ quoted me in his most recent article. We need to be focused on corporate earnings trends and the impacts that supply chain shortages along with labor shortages will have on demand and thus corporate profits.

Read on for the full article, which originally appeared here.

Lawmakers are again engaged in a game of chicken regarding how much money the nation can borrow, but financial advisers aren’t letting the commotion ruffle their feathers.

Over the past few weeks, Democrats and Republicans have been at loggerheads over raising the debt ceiling. The Biden administration had been warning that Congress must act by Oct. 18 to avoid a default and the devastation it would cause to U.S. financial markets and the global economy.

Fights over the debt ceiling have engulfed the nation’s capital in 2011, 2013 and at other times since. But lawmakers have reached agreements to allow the country to keep paying its bills. Investment advisers are looking for a similar outcome this time.

“This is just politics and noise,” said Paul Fenner, founder of TAMMA Capital. “They’ll end up getting a deal done, more than likely.”

Fenner was proven partially correct on Thursday, when Senate leaders announced a deal to raise the debt ceiling through early December. Temporarily lifting the cap, which was $28.4 trillion in August, provides breathing room but also keeps alive the possibility for more brinkmanship in a few weeks.

In a meeting with business leaders on Wednesday, Treasury Secretary Janet Yellen said that if the country goes into default for the first time in its history, interest rates would spike, the economy would go into recession and Americans would stop receiving government payments, such as Social Security.

Earlier in the week, SEC Chairman Gary Gensler told lawmakers how financial markets would be dealt a severe setback by a default. These warnings make one adviser confident the debt ceiling won’t be breached.

“Just because everyone knows how catastrophic defaulting on the debt would be, it reduces the uncertainty,” said L.J. Jones, founder of Developing Financial.

Rising inflation is more of a threat to Treasury debt obligations. “That’s a much bigger risk for bond holders,” Hempel said. “The debt ceiling is a political football we continue to throw around.”

Inflation is a worry for his clients, too, Fenner said. In addition, his small-business clients are concerned about rising labor costs and material shortages. He is watching the economy rather than Capitol Hill when thinking about portfolio adjustments.

“I’m making those decisions based on corporate earnings trends, not the debt-ceiling debacle in Washington,” Fenner said.

Although Jon Ulin doubts there will be a default, he is using this moment of uncertainty to talk to clients about their asset allocations. “If you’re not diversified enough, you might want to consider making changes,” said Ulin, chief executive of Ulin and Co. Wealth Management.

He also uses the conversations to keep clients from overreacting to the swirl in Washington.

“That reduces their chances of taking short-term actions based upon uncertainty or fear of an event that hasn’t happened yet,” he said. “Sometimes the least action you take [leaves you] better off. It’s all about being long-term investors.”

But Jim Crider, chief executive of Intentional Living FP, points to a debt-ceiling breach as an example of how the dollar can be undermined. He turns to cryptocurrencies as a safe harbor against the diminishing value of the dollar.

Although Gensler has warned about potential investor harm related to crypto investments, Crider argues crypto is volatile but not risky because of certainty about how much is in circulation and how much can be mined. Each of his clients holds 10% to 20% of their portfolios in Bitcoin or Bitcoin mining companies.

“We use Bitcoin as a hedge against risk associated with corruptible money,” Crider said. “There is more risk in the U.S. dollar and traditional asset classes than there is in Bitcoin.”